The effects of Botulinum Toxin A (BTX-A) on plantarflexor spasticity, stiffness and gait in chronic stroke

Plantarflexor (PF) spasticity secondary to stroke can decrease mobility and reduce function. BTX-A treatment is increasingly used clinically to reduce spasticity, but its effectiveness on mobility has not been established. This pilot study from Queen’s University in Canada which was presented in the European Stroke Conference on 30th May 2007 in Glasgow, UK examined PF spasticity, gait kinematics and kinetics following BTX-A treatment. Six patients with chronic spastic hemiparesis, capable of ambulation without an ankle-foot orthosis, received BTX-A injections into the affected gastrocnemius, soleus and tibialis posterior muscles. At baseline, two weeks (T1) and one month (T2) after this treatment, they underwent a three dimensional, bilateral gait analysis at normal walking speed. This provided temporal-spatial, displacement and power information for the ankle and joint displacement information for the knee throughout stance. The results showed that the gait speed, step length and strides per minute remained stable over time (p>0.41). There was a decrease in asymmetry of the maximum power absorption of the ankle between the affected and non-affected sides at T2 (p=0.013) and total power generation at the ankle at T2 (p=0.016). There were no significant changes in ankle and knee kinematics over time. A trend towards increased ankle dorsiflexion (p<0.13) and increased knee range (p<0.21) on the affected side was observed at T2. Changes in gait were accompanied by a reduction in PF spasticity.

The decrease in side-to-side differences in power generation and absorption reflects improved gait symmetry following treatment. The increased ability to produce work suggests improved gait efficiency following BTX-A treatment in conjunction with reduced spasticity. The inability to detect significant change in kinematic variables may be due to the small sample and large variability thus reducing statistical power. As recruitment continues, the importance of the trends observed should emerge to better describe the effects of BTX-A on gait and the sustainability of any benefits. 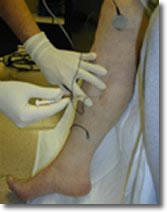