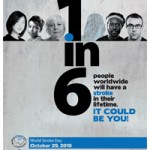 Stroke is common and it is not only affecting the patients themselves but it can affect the families as well. Several studies showed that almost 40% of the stroke carers suffer psychological distress year after a stroke.

World Stroke Day (WSD), one of the projects of the World Stroke Organization (WSO), is a call to arms to fight against this disease. Last week in South Korea the World Stroke Organization has launched a two-year stroke campaign at the World Stroke Congress. It encourages the health professionals around the globe to address more actively the risk factors for stroke and transient ischaemic attacks. The theme for the World Stroke Day 29th October 2010 ‘One in Six: Act Now!’ underlines again that 1 in 6 people worldwide will suffer a stroke in their lifetime, and it could be you!. Public awareness and raising the profile of the primary and secondary prevention service is crucial in achieving the goals towards a healthy society.